In the beginning, there was the encounter between a Belgian who loved wine and a region, Burgundy.

Jean Rijckaert started making wine in 1990 in the Mâconnais region, where he had settled, as the co-founder of the Verget wine merchants in Sologny. In 1998, when the Domaine Rijckaert was created, Jean bought 4 hectares of vineyards in Maconnais (mainly in the Viré-Clessé area) and, as an enthusiast for the Jura region and convinced of the area’s winemaking potential, 5 hectares in Arbois. A visionary…

Every region has its own wine cellar, so they can work as close as possible to the vines. Mâconnais wine is made in Davayé. And in Jura, it is made in Villette-Les-Arbois, a winemaking village close to Jura’s wine capital.

The range is completed by making wine from grapes purchased “on the vine stock”. Notable representatives include wines from Chablis and Côte d’Or. The grapes are processed entirely in house, from harvesting to bottling, with the same precision and same care given as to the estate’s own grapes.

In the early 2000s, Jean met Florent Rouve during a tasting of Saint-Véran… They got on well from the start. With his heart in Jura and his feet in Burgundy, Florent was naturally taken with a winemaker promoting both wine regions.

They went on to become alter egos. Jean decided to gradually pass on the passion and high standards in winemaking that give Rijckaert wines their special character. Limited yields, harvesting by hand, slow and moderate wine pressing, native yeasts, long development… plus a few little secrets that are a winemaker’s trade mark!

Florent, a friend of Julien Collovray, another winemaker in Davayé, officially took over at the RIJCKAERT estate in 2013. He was backed by the Collovray and Terrier families, who showed him complete trust. Florent protects the spirit of RIJCKAERT wines, but has also helped them develop more freshness and tension. These high standards involve investing in equipment adapted to the painstaking development of the wines and a respect for natural resources.

Florent, where did you spring from?

From early childhood I would hear my father, a geologist, talking about his explorations, and I always wanted to do a job involving nature. After studying forestry, I continued my education with a degree in agricultural engineering. To help pay for my education I did part-time jobs in vineyards and wine cellars.

I loved wine and winemaking so much that I decided to make it my career. So I completed my education by studying oenology in Dijon. I did a wide range of jobs and eventually, in 2007, I became the steward at the Domaine des Poncétys, the Mâcon-Davayé college’s winery.

There I met Jean Rijckaert.
I had no idea I would have the chance to continue the work of this great winemaker! The hand of fate…

The winemaking soils in Burgundy and Jura date from the same geological era, some 150 million years ago: the Jurassic.

The Jurassic was given its name by Alexandre Brongniart in the 19th century. He used the term to describe the thick layer of limestone found in the Jura region. This sedimentary layer was formed by the sea – warm seas once covered this part of France! It is an ideal parent rock to form limestone soils, allowing Chardonnay and Savagnin grapes to find full expression.

The rocky foundations developed differently in the two regions in later geological periods. They were subject to random geological events and the much more continental climatic influences east of the River Saône, in Jura. Today, Burgundy and Jura basically have the same clay-limestone soils. To simplify, we can generally find more stony, dry and pervious soils in Burgundy than in Jura, where the grapes grow in marlstone-rich, cool and humid soils. But of course each plot of land has its specific qualities.

The same methods are used on the vines in BURGUNDY and JURA. Our aim is to foster the autonomous development of the plant by boosting its own immunity to fungal disease.

We foster biodiversity in the vineyards, where chemicals are never used. The soils are ploughed, while leaving a strip of glass for the tractors to drive along. Treatments are based on copper and sulphur only, along with plant-based fertilisers to help the chlorophyll to thrive in the vine and decrease the amounts of copper we use.

The method aims to:

Our work is guided by “the specific quality of the grape variety and the typical nature of the soils”. Respecting all aspects of the grape juice at every step of our work is primordial:

A great “taster” to discover all the finesse of Jura Chardonnay wines!

Chardonnay A blend from different Chardonnay vineyards between the villages of Arbois and Villette. Grey marlstone from the early Bajocian era with limestone scree in the steepest areas

Grapes grown in cool soils. Fans will love the incredible tension in this wine.

The old Savagnin vines give rise to a full-bodied wine with an impressively long salty flavour… Savagnin is a sheer delight!

Full expression of the Savagnin grape in all its varietal aspects. A very lively wine.

A great locality for white wines. This wine has surprising richness and finesse. Pure “terroir”!

A rich, complex and mouth-watering wine… Ideal for a quick lunch.

Fossilised limestone and marlstone sediment from the early Bajocian, Lias and Triassic ages. Cool under ground, fostering roots, and warm on the surface to promote maturity.

Savagnin has found its home with a wonderful expression of its full potential. Body, depth… This is wine in its pure state…

100 % POULSARD: a local grape variety with a thin skin, with no strong tannic element, but providing an acidic body ot the wine. You should drink “La Rouge” in the same way you would drink a refreshing white wine!

“La Rouge” is our only Jura red wine. The grapes grow in iron-rich clayey soil with a hint of… redness.

Generally from the north of the wine region (Cruzille, Chardonnay, Burgy), this Mâcon-Villages conveys fullness and mineral purity.

The village of Burgy on the Mâconnais hills produces fresh and dynamic wines. An eminently drinkable, thirst-quenching wine!

A 100% Mâconnais area, where Chardonnay grapes have a strong aromatic strength, but also produce fresh and delicate wines.

The view from these east-facing vineyards at sunrise is quite simply magical! Limestone / chert soils on red clay. The area is also known as “Mont Rouge”.

This is our only wine blended just after the grapes are pressed (hence the name). The vineyards on nice clay soils produce smooth wines but with the mineral characteristics of the great Viré-Clessé appelation!

A blend of complementary grapes from different sources. Limestone from the early and mid Bajocian period with layers of red clay of varying widths.

A delicate Viré-Clessé, with plenty of strength but also well balanced with a fine mineral aspect…

One of the estate’s flagship wines. All the generosity of grapes picked at the height of their maturity and the finesse of scree soils are preserved by a light-handed vinification process.

The typical generous quality of the Saint Véran appelation is followed by a great finish resulting from the limestone-clay origins of the wine.

From the north of the Saint-Véran wine region, this wine takes its finesse and depth from the hard limestone on the slopes of the Roche de Vergisson, where tiercelets (small birds of prey) nest in large numbers.

“En Crêche” is an area of the Saint-Veran wine region that is renowned for its unique features. In this stony “cradle”, shaped by the eastern slopes of the Roche de Vergisson, a wine with impressive density is born.

Expresses the typical qualities of the famous appellation. A blend from vineyards in relatively cool areas (facing west), this Pouilly-Fuissé has a generous heart in an elegant body.

This magnificent stony location on the Roche de Vergisson plateau calls for early harvesting to preserve all its high standards. A wine with great mineral density, expressive and delicate.

Soils of limestone scree on clay. A cool environment on the western slopes of the Roche de Solutré…

The old vines on the southern slopes of the Roche de Vergisson store up heat, but fortunately keep their “feet” cool with long roots making their way down between the stones (known locally as “Croux”) to the clay. This wine is characterised by its power and softened by a wonderful mineral structure.

On the south / south-eastern slopes of the Roche de Vergisson. Soils arising from superficial stone deposits on marlstone.

Painstakingly developed in 400 litre casks, this Aligoté made from vines that are over 60 years old is an inviting and dynamic wine, ideal for a quick lunch with friends!

Marl limestone at the foot of the slopes facing south-west.

A rare wine (just 5% of the appellation produces white wines), enriched by its southerly location but with a mineral intensity that is a great feature of Côte d’Or.

Santenay wines are made south of Côte de Beaune, near Chassagne and Puligny. Marlstone soils.

The wines are developed in casks with little new wood (20%). We aim to bring out the noble power of this noble wine in the great tradition of the great white wines of Côte de Beaune.

The solid roots of these old vines dig deep into the marl limestone in vineyards between Meursault and Puligny-Montrachet.

The old Gamay grapevines are vinified in a traditional way, resulting in a fruity and festive wine made for sharing!

A soil of alluvial deposits from the tertiary and quaternary eras taking the form of siliceous clay.

A wine that is both filled with the power of its origins and the finesse of the grape variety.

“Les Marconnets” is a plot of land on the Beaune side of the appellation, on sandy clay soils with traces of iron-rich limestone.

Let’s not forget that wine is first of all a drink, and that everyone should be able to enjoy it without feeling intimidated. Wines should be dynamic, refreshing, festive and made for sharing. One glass should lead to another and the bottle should seem too small…

At Rijckaert we have a strong attachment to the social dimension of wine. Wine transmits a Culture. It is a gateway helping to develop “links”.

In terms of food-wine matches, we dislike “dogmas”. Everyone can do as they please according to their own references. We can only make a few suggestions… based purely on our own tastes! 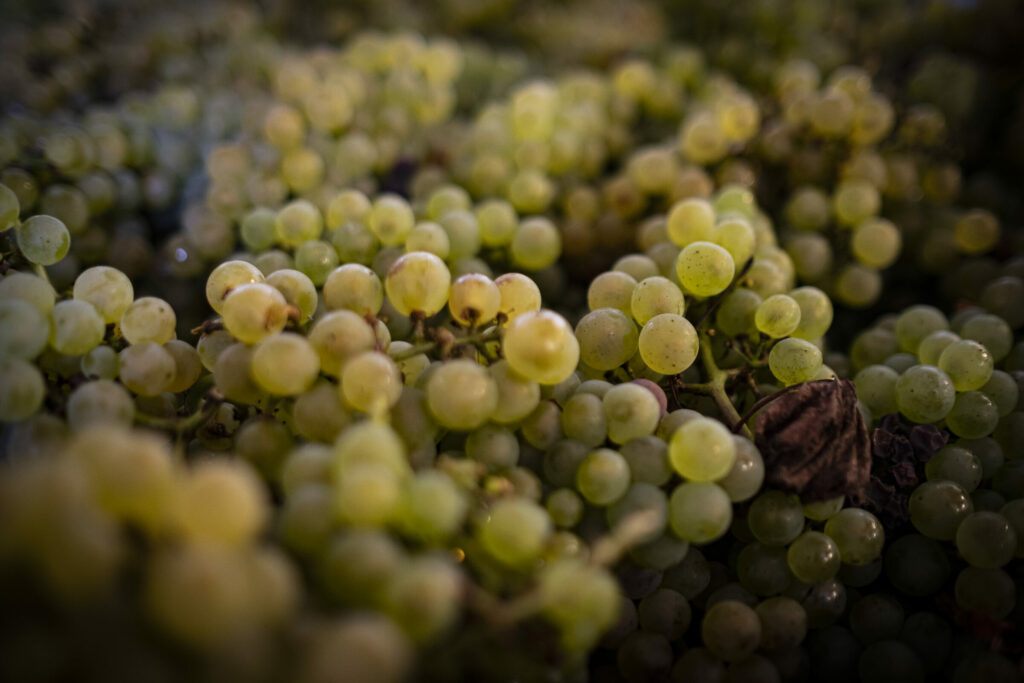 All that was missing was a swarm of crickets!
If not, we had pretty much all the hassle possible in 2021: a huge frost in Spring, hailstorms, continuous rains during the vegetative period – preventing effective treatments (especially in organic farming)…

Harvest volumes are therefore very strongly impacted. And it is a national situation…

This low harvest leads to a very substantial increase in the cost of producing a bottle.

But we don’t feel sorry and keep smiling! We just have to lay low and try to adapt… As far as I am concerned, I will try not to apply a big price jump between 2020 and 2021, preferring successive and progressive increases.

Bourgogne Aligoté “Bien Elevé” 2020: from the Beaune area, harvested by ourselves and vinified in the “Rijckaert” style with meticulous development in 400L casks. We love grape varieties with a nice fresh taste! Scheduled release in spring 2021.

Mâcon La Roche-Vineuse “Levant” 2020: vineyards facing east, located on Mont Rouge in Hurigny, where the sunrise is breathtaking and the landscapes stretch as far as the eye can see over the Sâone plain, Ain, Revermont and the Alps (including Mont Blanc!). Organic estate vines (with the green label) on magnificent red clay and chert soils… Serious stuff!

Our guest rooms in Arbois will be all ready in spring!

Congratulations to the chef Enrique Casarrubias at the OXTE restaurant for his first Michelin star in 2021. We hope we will soon be able to go back for a great meal…